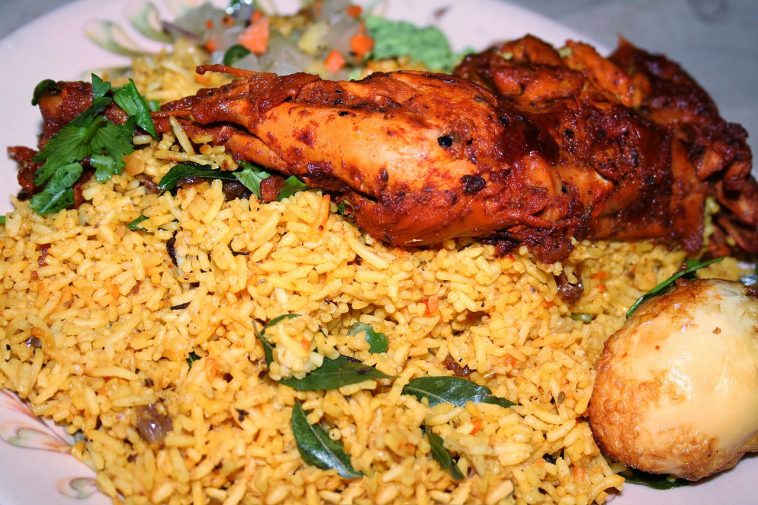 Sri Lankan food is always high on my priority list when I return to the island of my parents’ birth, having lived in Singapore and away from Sri Lanka for close to 15 years. Despite being a small island nation, Sri Lanka has a rich offering of culinary delights but Sri Lankan food is a mystery to many — it shouldn’t be — and there’s no better place than the island’s economic capital Colombo to begin your adventure into Sri Lankan cuisine.

Many years ago, Sri Lanka was a key trading stop on the spice route, making Sri Lankan food today a microcosm of the cultures and the people from distant lands who traded with and colonised the teardrop-shaped island in the Indian Ocean.

And once known as the Granary of the East, Sri Lanka produced over 200 varieties of rice going back thousands of years. While Sri Lanka’s best agricultural days are well behind us, the love for rice and spice amongst us islanders remains strong.

These delicious rice entrées highlight the delightful combination of flavours savoured by the diverse inhabitants of this remarkable tropical paradise.

The buth packet, also known as a lunch packet, is a daily lunch option for a majority of Colombo’s busy residents. Several spicy curries, with your choice of seafood, meat or only vegetable curries, served on rice and wrapped in plastic, and then wrapped again in old newspaper for easy portability — rice and curry to go!

Don’t forget to read the packaging for a taste of local news, as you devour your food. Lunch packs are offered by both small, street-side restaurants and upper-end eateries.

A typical Sri Lankan lunch packet contains rice as the base (try the indigenous red rice, which is high in fibre and has its own distinct taste) and a variety of vegetables, which can be anything from beetroot to lotus root to curried carrot or beans and brinjal (eggplant).

If you’re lucky, you may find in your lunch packet wambatu moju, which is a relish made with smoky fried eggplant in coconut vinegar and mustard. It is addictive.

There is also mallum or mallung, which is a finely-chopped leafy green salad (kale, spinach or gotu kola is commonly used too) combined with grated coconut and lime juice, and, because Sri Lankans love dhal, a lunch packet almost always contains the popular curried lentil dish.

Interesting fact: Sri Lankan curries use coconut milk as their base, as opposed to yoghurt or cream used elsewhere, and coconut oil, which makes the vegetable curries vegan-friendly.

Remember to try papadam and fried salted-chillies and mango chutney, if available.

If you’re vegetarian or vegan, give the jackfruit and breadfruit curries a go, or try soya meat curry for a mock-meat experience. The pumpkin curry is good too.

Lamprais is a decadent banana leaf-wrapped meal attributed to the Dutch-Burgher community.

The components of this dish vary between traditional and modern lamprais. The original version consisted of three meats: lamb, beef and pork.

Many versions exist nowadays, and you will regularly find beef or pork substituted with chicken.

The Fab and Green Cabin in Colombo 3 are popular for lamprais, but my personal favourite is sold at a hospital cafeteria (Lanka Hospitals). Confession: I’ve visited this hospital just to get my lamprais fix.

I have fond memories of my father bringing home this basket of fragrant rice, which is prepared by the island’s Muslim community in portions best-suited for group dining (each kidu serves three to four people).

This fragrant meal is laboriously prepared and consists of short-grain rice cooked in butter, screwpine and coconut milk.

Many variations are found but kidu is often served with a side of sweet onion and capsicum pickle, dhal (lentils) curry, fried beef or chicken, beef curry, and kaliya, which is a mixed dish of ash plantain, fried eggplant and chicken liver, although most commercial kidu will leave out chicken liver.

Kidu is sold in a woven basket made of coconut leaves.

My personal favourite for kidu is either Galle Caterers in the outskirts of Colombo (Dehiwala) or Beruwala Eating House in Colombo 6.

Yes, biryani is widely referred to as buriyani by Sri Lankans.

Sri Lanka’s version of the biryani is made with shortgrain rice and includes spice-coated fried chicken, a boiled egg and mint sambol, making it more like Malabar biryani.

It is said that it was the famous biryani at Buhari restaurant that the name buriyani came from, and it’s a favourite among Colombo’s old-timers.

Try the biryani at Buhari Hotel and Majestic Hotel, as both have been around for decades.

For an interesting twist to this festive dish that is popular in many countries, check out Pot Biriyani.

Kiri buth translates to milk rice. It is often only served with lunu miris, which is a fiery onion relish that spices up the milky, creamy coconut rice.

Less commercially available takes on kiri-buth include the addition of green-gram in the rice.

Kiri buth, which is rice cooked in coconut milk, is eaten sweet too. Some add sugar as a topping and skip the spicy onion relish, but also look for versions that include green-gram and palm sugar (mostly homemade) or imbul kiri-buth, which is stuffed with palm sugar and coconut.

The rice dishes above all have varied mixes of chilli, turmeric, coriander, cloves, cinnamon, cardamom, star anise, black pepper, nutmeg, mace, screwpine and curry leaves, as well as other exotic ingredients; they bring to life each dish, and with it, the story of those who traded, colonised, visited and remained on Sri Lanka’s shores.

Back to Top
Close

We use cookies and external scripts to improve your experience.

This site uses functional cookies and external scripts to improve your experience. Which cookies and scripts are used and how they impact your visit is specified on the left.

NOTE: These settings will only apply to the browser and device you are currently using.

When you click on a link to Amazon (eg travel guide book recommendation), we can direct you to the Amazon country-specific website closest to you.

Used to serve relevant ads, which is beneficial for you and us. You will see advertising that will be helpful to you and interests you, while assisting us monetise and deliver this content free to you.